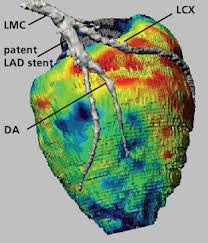 Positron emission tomography (PET) is a nuclear medicine, functional imaging technique that produces a three-dimensional image of functional processes in the body. The system detects pairs of gamma rays emitted indirectly by a positron-emitting radionuclide (tracer), which is introduced into the body on a biologically active molecule. Three-dimensional images of tracer concentration within the body are then constructed by computer analysis.

What is a cardiac PET/CT scan?

A Cardiac PET Scan is an investigation that uses the position of radioactive substances within the body to give an idea about its function. Those parts of the body that are the most active need energy, and the energy that it uses is sugar (also called glucose). A PET scan uses a specially created substance that the body thinks is sugar, and takes it up into the cells. This substance is called a ‘tracer’, and it is almost exactly like sugar, but has a small radioactive part attached to it.

A Cardiac PET Scan uses this same technique, but uses different tracers and some different techniques to get a good idea about the function and blood flow to the heart. Often it is combined with a CT scan so that the doctor can see both the structure and function of the heart.

How Does a Cardiac PET/CT Scan Work?

PET scans work to identify the cellular changes that occur in the body during disease.  During a PET scan, the patient is given a substance called a tracer, typically a chemical found in the body (oxygen, glucose, nitrogen, fluorine) which has been tagged with a radioactive atom that breaks down quickly to release positrons. The tracer for PET scans has a complicated name but is mostly known as FDG (which stands for 2-[18F]fluoro-2-deoxy-D-glucose). FDG is very similar to glucose (sugar).

Once in the body FDG travels to the area of the body that is using a lot of sugar and breaks it down. In breaking down, it releases a positron. This combines with an electron from the patient sending out radioactive waves.

These waves can be detected by the PET Scanner which converts the waves into electrical signals that can be analysed by a computer. The computer can then create images of the targeted tissue’s function, in a color code. Different colors or degrees of brightness on a PET image represent different levels of tissue or organ function. In the image to the right, areas that use more sugar, and so collect more of the radioactive substance, are shaded darker.

For a Cardiac PET Scan, a different tracer is used than in a normal PET scan because uptake of sugar is not a very helpful thing to measure for the heart. For cardiac PET scans, the most common tracers are a type of ammonia with a bit of radioactive material attached to it, a substance called Rubidium and a radioactive type of Fluorine.

During a Cardiac PET/CT Scan

PET scans are generally done in an outpatient setting and preparation is usually set by your doctor. The scan does require the patient to lie still for roughly twenty three minutes.

Women who suspect they may be pregnant or are pregnant need to notify their doctor as this is a radioactive procedure and could have effects on an unborn fetus.

The PET scanner is a donut-ring shaped apparatus with an attached table that moves into the scanning ring. Initial scans may be done before you are taken into a special injection room where the tracer is administered, usually intravenously.

During the scan, you must lie very still to allow for clarity of the images. After the scan there are no restrictions to daily activity, but it is recommended you drink plenty of water to flush your system of the tracer.

Benefits of a Cardiac PET/CT Scan

PET /CT scans have five times less radiation than the more frequently used but highly inaccurate SPECT SCANS used in doctors offices and hospitals. PET scans are beneficial as they demonstrate the biochemical changes in the body, whereas CT or MRI scans identify anatomical changes.

A PET Scan therefore helps to identify problems at the level of their activity and function, which might change long before any changes in body structure (such as a tumor) become apparent.

A cardiac PET/CT scan is useful because it can give very precise images, is not greatly affected by the fast changing blood flow in the heart and can give information about how much of the tracer ends up in different parts of the heart. This is important because it can give doctors information about damage to the heart, and show areas that may have problems with low amounts of blood flow.

Limitations of a Cardiac PET/CT Scan

A PET scan is less accurate in certain situations:

Results of a Cardiac PET/CT Scan

Cardiac PET/CT scans could show a doctor that blood flow to the heart is completely normal but could also show that things are going wrong. The doctor would be looking for any parts of the heart that did not get an adequate amount of the tracer as this would show that it is also not getting enough blood.