No radiation from this test!

MRI is a safe, noninvasive test that creates detailed pictures of your organs and tissues. “Noninvasive” means that no surgery is done and no instruments are inserted into your body.

MRI uses radio waves, magnets, and a computer to create pictures of your organs and tissues. Unlike other imaging tests, MRI doesn’t use ionizing radiation or carry any risk of causing cancer. 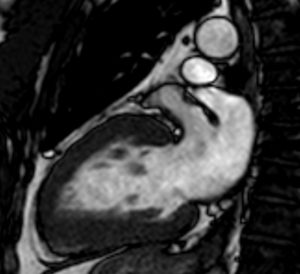 CMR creates both still and moving pictures of your heart and major blood vessels. Doctors use CMR to get pictures of the beating heart and to look at its structure and function. These pictures can help them decide the best way to treat people who have heart problems.

CMR is a test used to diagnose and assess many diseases and conditions, including:

CMR can help explain results from other tests, such as x rays and computed tomography scans (also called CT scans).

Doctors sometimes use CMR instead of invasive procedures or tests that involve radiation (such as x rays) or dyes containing iodine (these dyes may be harmful to people who have kidney problems). 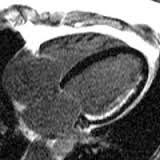 A contrast agent, such as gadolinium (gad-oh-LIN-e-um), might be injected into a vein during CMR. The substance travels to the heart and highlights the heart and blood vessels on the MRI pictures. This contrast agent often is used for people who are allergic to the dyes used in CT scanning.

People who have severe kidney or liver problems may not be able to have the contrast agent. As a result, they may have a non-contrast MRI (an MRI that does not involve contrast agent).

Open Maps Widget for Google Maps settings to configure the Google Maps API key. The map can't work without it. This is a Google's rule that all sites must follow.